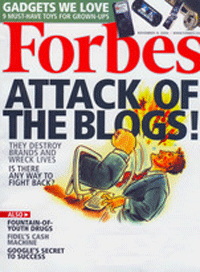 I was researching something unrelated yesterday when I stumbled upon a gem from the past of Daniel Lyons, a.k.a. Fake Steve Jobs.

It was November 2005, TechCrunch was 5 months old and had yet to break into the Alexa top 10,000, and Lyons was then, as he still is now, writing for Forbes. Despite the growing tide of positive publicity surrounding blogging following the 2004 Presidential Elections, Lyons hadn’t yet received the memo that blogs were actually good.

Perhaps Lyons feared for the future of mainstream journalism? Perhaps he was trying to be the Andrew Keen of 2005? In the Forbes Cover Story “Attack of the Blogs” he makes his blog hating stance plainly clear in the first paragraph:

Web logs are the prized platform of an online lynch mob spouting liberty but spewing lies, libel and invective. Their potent allies in this pursuit include Google and Yahoo.

Blogs started a few years ago as a simple way for people to keep online diaries. Suddenly they are the ultimate vehicle for brand-bashing, personal attacks, political extremism and smear campaigns…

The online haters have formidable allies amplifying their tirades to a potential worldwide audience of 900 million: Google, Yahoo and Microsoft…Google and other services operate with government-sanctioned impunity, protected from any liability for anything posted on the blogs they host. Thus they serve up vitriolic “content” without bearing any legal responsibility for ensuring it is fair or accurate;

And though they have First Amendment protection and posture as patriotic muckrakers in the solemn pursuit of truth, the blog mob isn’t democratic at all. They are inclined to crush dissent with the “delete” key…

OK, sins of the past and all that, but going back two years Lyons’ story made major headlines; this was an attack article that didn’t even pretend or try to be subjective or fair. So what changed? Did Lyons see blogging as a tool for fame and a book deal despite his hatred of the medium? Would Fake Steve Jobs have had a lesser following if people knew of Lyons’ past? Perhaps not, but recalling that article certainly makes me personally less inclined to be supportive of his future endeavors.