Wikipedia attracted a lot of attention earlier this week when Nikola Smolenski calculated how much paper it would take to print out the English entries in Wikipedia. Smolenski calculated that as of last September, Wikipedia’s English index of informative/controversial articles would fill about 750 400 page volumes. Under the assumption of a 6MB volume, the total site would take up about 2,500 volumes (~15GB).

Today Scribd has released some numbers talking about just how big they’ve gotten as well. Since launching 6 months ago, the site has collected over 178,798 documents. That may not seem like much compared to Wikipedia’s over 5.3 million articles (source) across all languages (as of last September), but Scribd users seem more verbose. Scribd users have uploaded over 1.9 billion words, which would take up over 2,287 of Smolenski’s volumes (13.4 GB). No word on how many of those words are copyrighted.

However, Wikipedia is still obviously the pageview king, drawing over 7 billion pageviews (June) and 42.9 million (Feb) visitors per month, to Scribd’s 3.8 million uniques. Google was responsible for 24% of the traffic, and I imagine the same is true for Scribd. Wikipedia also features highly targeted and edited content to Scribd’s library of reports and rants. Although, unlike Wikipedia, Scribd is helping a lot of people catch up on Harry Potter.

Scribd has had quite a ride since launching over 6 months ago. They sustained a considerable amount of traffic after launch, and eventually went on to raise $3.5 million from Redpoint Ventures. Apparently, easily publishing documents online was not a solved problem.

Here’s a chart of the word growth of both Wikipedia and Scribd: 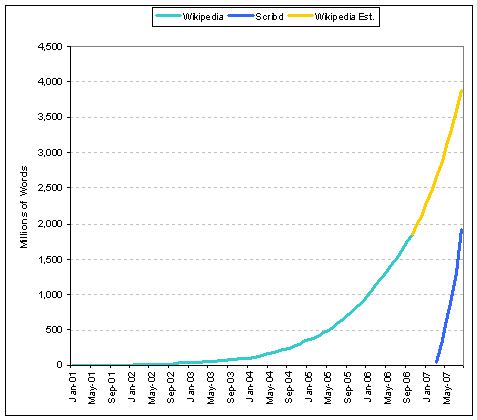 Note: According to statistics listed on Wikipedia, the site (all languages) has grown from 49,000 words in January 2001 to 1.7 billion words last September (the last reported point). Since the data only goes to September 2006, I extrapolated the growth (yellow) assuming the previous year’s monthly growth rate of 7.7%.