gBox is a new take on selling digital content. Instead of emphasizing sales directly to consumers, gBox is encourages you to create wish lists and buy gifts for your friends and family. To kick-start the service, they’ve sealed a pretty big deal with Universal to be the retailer for their new “Open MP3” experiment into DRM free music. In a move that’s a snub to Apple’s iTunes, Universal will be buying Google AdWords for their music, linking people to the gBox site to buy their artists’ music. gBox will be expanding to other forms of digital content in the future. 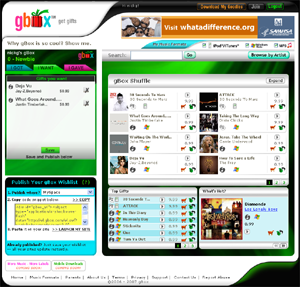 gBox is not only a destination retail site for digital content. It also has an embeddable gift box widget to show off what you want to your friends. Your friends can then buy it for you directly from within the widget. It will be available as a general embed or specialized for 7 of the big social networks (no Facebook). Their current offering, music, will go for 99 cents per track and $9.99 per album (to stay competitive with iTunes). You have to have a gBox account to receive a gift, but not to buy one.

Considering people already pay 99 cents to send their friends virtual gifts on Facebook, I’d expect buying a real song to be an attractive proposition. It also seems like a missed opportunity for a network like MySpace, which runs on Snocap.

You can download the content after its bought for you, but need a special gBox plugin to control the downloads since some content partners (Sony, IODA) will be selling music with DRM. This makes the offering somewhat disappointing, because the plugin will only work for IE (FF on the way) and not on the Mac.

gBox was started in June as an angel funded spin-off from Navio systems. They’re a 20 person company based in Cupertino, California.