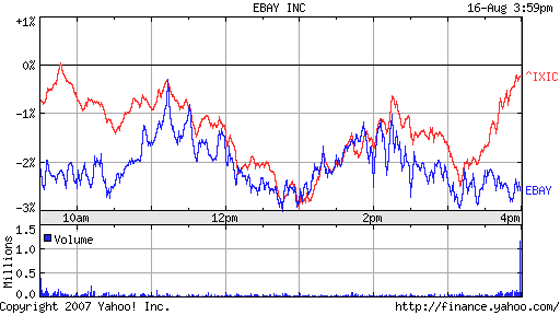 It was a bad day for stock in general, but eBay had a double whammy.

eBay shares closed down 2.58% (89c) Thursday despite a late rally by NASDAQ listed stocks. The decline knocked $1 billion + off eBay’s market cap and follows a day where the eBay owned VOIP provider Skype remained crippled by a system wide outage.

The Skype outage is now approaching 18 hours (at the time of writing) with little information coming from Skype other than that the issue is related to “sign-on problems.” Skype earlier in the day was forced to deny rumors that their platform had either been hacked or subject to a cyber attack.

Some users have reported intermittent Skype service, with the service connecting then dropping after several minutes.