Earlier this month we tackled the evolving space of online live video. In its raw form, live is a very different format when compared to recorded video. There’s no post production editing to cut out your gaffs or nab the best parts. Pushing the most interesting content in front of viewers in real time is a challenge. But there’s an audience to interact with, and that makes all the difference.

Ustream’s version 3 redesign released today is focusing entirely on the audience-host relationship. They’ve added three new interactivity features to the platform: shout meter, live polling, and a video archive widget. They are all solid additions to the service. 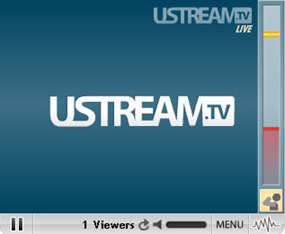 The shout meter lets users vote for the current channel’s content by clicking vigorously on the sidebar. More clicks from more users pumps up the shout bar, tipping Ustream off to something good happening on the channel. The bar on the right reflects your own shout level (red) and the crowds (yellow). There’s no word on how they’ll use the shout meter data.

It’s another take on what Justin.tv has been doing with their Tips feature, which lets viewers vote up segments of a live video stream. The top Tips are organized in a top list available on all the publisher pages. 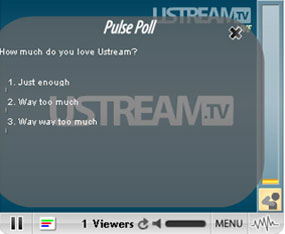 Ustream has incorporated live polling into their Broadcaster Console, letting the publisher throw a few questions to the audience in real time.

Polls are on a transparent layer over the stream, so you can still see the show. Viewers point and click on the answers they want or can opt out by closing the box.

It’s a more rigorous version of simply posing a question to the chat room, or soliciting emails from viewers.

Ustream not only produces live video, but also maintains an archived library of past footage. Their new archive widget will let viewers flip through old shows without affecting the current video. Archived content was previously stored just on plain pages.

I’m guessing Ustream will be incorporating the “shout” feature into this module to help filter the content by date and interestingness.

Evolution amongst live video sites has turned into a kind of an arms race, as sites seek to nail down the right look, feel, and features to draw the best publishers and crowds of viewers. Live video is still out of the mainstream, even for sites like Stickam that were around during the YouTube boom. I imagine we will see even more innovation in the coming months as live finds its place in the spectrum of online video.