The British government turned down a request by the UK music industry to extend copyright for sound recordings beyond 50 years to 70. Artists are now particularly concerned with copyright as demand for their back catalog and accompanying royalties grow.

Such an extension would retain the ownership rights and royalties for artists like Cliff Richard, Paul McCartney, and their publishers. Cliff Richard, whose 1958 hit “Move It!” is nearing the cut off, would be one of the first to lose his ownership.

The government decided against the extension because it would require pushing the European Commission for changes and may increase costs while not benefiting the majority of performers. Predictably, artists and the industry fired back saying the government was simply refusing to support artists.

The Who’s Roger Daltrey was one of the most vocal critics, saying, “Thousands of musicians have no pensions and rely on royalties to support themselves. These people helped to create one of Britain’s most successful industries, poured money into the British economy and enriched people’s lives. They are not asking for a handout, just a fair reward for their creative endeavors.”

The government based its claims primarily on the Gower’s Report (PDF), a study of intellectual property rights in the UK conducted by former FT editor Andrew Gowers. The report’s recommendations were focused on maintaining intellectual property rights while keeping costs of enforcement low. The report recommended against a previous request extending the length of copyright to an even longer 95 years, matching the US term. The report determined that the UK doesn’t suffer from a deficit in creativity due to the disparity in terms.

The chart below was a key diagram in the Gowers report citing that increased terms would not necessarily be the best way of supporting artists. Few records continue generating royalties after 50 years and the chart argues that re-evaluating recording contracts in favor of artists may prove a more effective method. 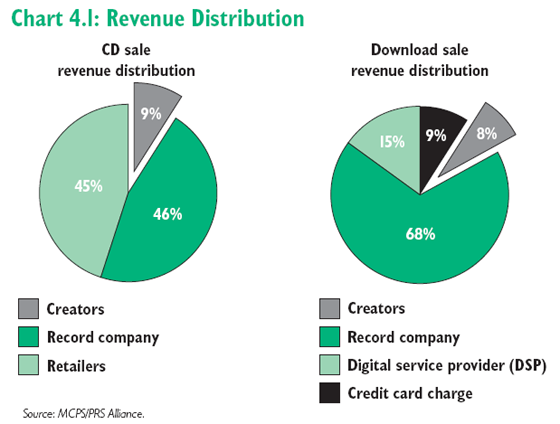 The continued resurgence of talks over specific copyright terms seems increasingly arbitrary, depending mostly on whose work is soon to fall into the public domain. Artists accusations that maintaining current copyright limits discourages creativity and deprives them of income seem increasingly ridiculous considering artists were still motivated enough to produce the works in full knowledge of the current limits.

The United States had previously extended the length of copyright to 95 years with the 1998 Sonny Bono Act. However, the Act was derided as the “Mickey Mouse Protection Act” under accusations that it was passed primarily to keep Micky Mouse out of the public domain, long after the death of his creator. As Lawrence Lessig has claimed, continued extensions of copyright terms have turned Congress’ Constitutionally granted authority to grant copyright for a limited time into an effective grant for perpetuity.