Streakr, a site that in private testing had a lot of buzz (we’ve covered it twice previously) launched in beta today.

Streakr is pitched as follows:

Streakr brings users the best of the web. They simply download a ‘discovery’ bar onto their browsers which, at the touch of a button, finds dozens of new websites that match their interests. They can then rate the sites they like and dislike by stamping them with a ‘thumbs up’ or ‘thumbs down’ icon. Once selected, the URLs are saved onto their personal profile page and indexed for future reference. The sites, which users can also review, can then be shared with fellow Streakrs via the social network.

The politest way of describing Streakr: MySpace and StumbleUpon got together and had a learning impaired child.

When first mentioned in March, Streakr was suppose to be a site with “attitude”, and yet the only attitude Streakr delivers is a social network that looks nearly identical to MySpace (complete with ugly profile pages) but lacks nearly all the features. Then there is the site surfing/ toolbar feature that is nothing more than a StumbleUpon clone. Users are also given the ability to search for friends on other social networking sites, however why someone would search for friends on other sites via Streakr and not Google, or the social networking sites themselves was not explained and there is no aggregation tools that could make this an interesting feature.

To be fair it’s only a beta launch, so perhaps Streakr will deliver a more compelling product in the future, but clearly the hype had no place in reality. If you’ve always wanted to be part of a social network built around a StumpleUpon style service, you might find some enjoyment from Streakr, for the rest of us; there is not a lot to see. 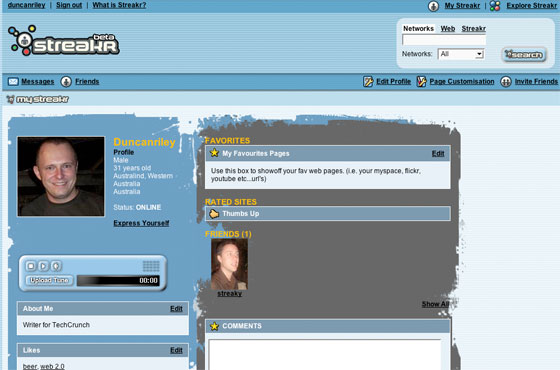