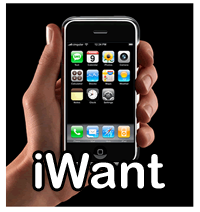 Thousands of people are eagerly waiting in line to get their hands on the iPhone. However, for those of us tied into long term contracts or who just find the high price tag too much cash to part with, we’ve compiled a list of how to emulate iPhone’s features on your everyday handset.

Perhaps the most talked about feature, visual voice mail easily lets you play your messages out of order with more detail about who called and when. There are a couple of startups who offer this feature, Callwave and Gotvoice. Both of these programs also have other features like voice-to-text, or voicemail-to-email.

People have been gushing over iPhone’s browser, which lets you surf the “real” internet through a zoom and scan interface. Opera has recently come out with Opera Mini 4 Beta that has the same zoom navigation feature controlled by your number pad. Microsoft has their own version for Windows Mobile called Deepfish in limited beta.

iPhone offers a rich HTML email interface including attachment support. Microsoft Exchange support stirred up quite a bit of controversy, but that may be resolved. Email has been offered on cell phones for a while now. Either Gmail, Yahoo, and Windows Live mail will work on your phone. Of course, Blackberry users need not apply.

iPhone is featuring a version of Google Maps that takes advantage of the touchscreen interface. A simpler Google Maps version is available for the rest of us and Yahoo is expected to release a mobile maps product on its Go platform soon. For voice and maps integration, readers should check out TellMe as well.

Apple is claiming the iPhone is the best iPod to date. We’ve covered several other mobile solutions for playing music on your phone. The most recent player has been MusicStation, which mimics iTunes and plays songs with accompanying album art. If you’re only interested in playing the music you already own, you should also check out MyStrands, Avvenu, and Pandora.

iPhone also lets you get information like weather and stock quotes through widgets. There are several companies already offering content widgets on a variety of phones. You should check out Bluepulse, Widsets, and GetMobio for ways of getting the content you crave to your phone.

Of course, if you’re willing to spend a couple days installing all this software, you might as well wait in line.