Video on the web is a killer app, but it’s also a bandwidth hog. Forbes estimated that content distribution networks like Akami or Limelight can charge distributors around a cent per minute, while larger distributors can get deals at around a half or tenth of a cent. Last year it was estimated that Youtube was spending over $1 million a month to stream more than 100 million videos a day. In response, video distributors looking to give higher quality video on the cheap are pushing the burden of bandwidth to users through peer to peer networking. So far this has widely focused around larger desktop players (Veoh, Joost, Babelgum). Video player startup Slapvid wants to do peer to peer in your browser.

Slapvid runs as a Java applet coupled with a Flash video player. Unfortunately this means users have to authorize the 300Kb applet to run the first time, but that still requires less initiative on the users behalf than a full blown browser plugin. The applet runs in the background, managing the delivery of video chunks to be displayed in the player. 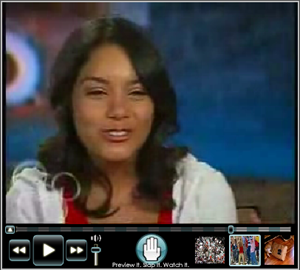 When you first start a video, the player connects directly to their central video server to download enough of the beginning of the video as a buffer while the peer to peer kicks in. During this request, their server also sends you back a list of 3 to 5 peers playing the same video. The applet then seeks out peers further along in the video, getting sent bits of the video in 64KB chunks. If you don’t hear back from the peers, the video just streams from the central server.

To demonstrate the peering technology, they’ve developed their own flash player that shows the top Youtube videos in 5 minutes. The player mashes together short clips of each video. You can see the whole video by clicking the hand. However, because of bandwidth concerns on their central server, the peering technology is only turned on for a small sample of users. All other users will just see videos streamed from Youtube. To guarantee you get the peering applet, you can apply for one of 100 beta accounts for Techcrunch readers. You can see the video player after the jump.

Slapvid is a Y Combinator startup from 4 Carnegie Mellon grads.