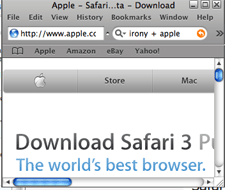 Apple’s newly released Safari Browser for Windows is coming under fire for all the wrong reasons today with separate reports indicating that the browser presents a security risk to Windows users.

Thor Larholm has published a 0day exploit that causes Safari to shut down when visiting a site with malicious code.

The browser has met with mixed reviews; the ability to quickly render sites being countered by visually foreign (to Windows users) font rendering and a failure to support the Vista Aero interface.