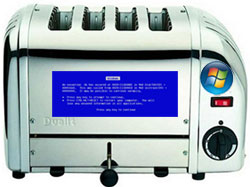 Mary Jo Foley at ZDNet has the scoop on Microsoft’s next best thing since sliced bread: Microsoft Kitchen.

According to Foley, Microsoft Kitchen will extend Windows to the kitchen with a tailored product that will include family calendar, recipe center, entertainment features and a shared bulletin board.

No, it’s not April 1 and as far as Foley is concerned this is actually being developed. Given Microsoft’s move into Surface Computing it’s not improbable that the kitchen may follow the coffee table as Microsoft’s next target.

There is some history of kitchen based internet appliances. The LG Internet fridge was launched several years ago and although wildly derided at the time, others saw it as a sign of things to come. The cost of computers in general is far more affordable today; a kitchen focused Tablet PC or similar device running Microsoft Vista Kitchen Edition may sound indulgent, but the economics make the path to success far easier than it was for the LG Internet Fridge.

Where do you want to go today with Microsoft Kitchen? Will it mix drinks? Share your thoughts in the comments. More at CrunchGear.

Update: Microsoft has just announced a new patent licensing agreement with LG. Could it be a case of Life’s Good with Microsoft Kitchen in the future?