The greatest strategists from around the world will gather in Toronto October 13 for the right to become the champion of champions. The 2007 World Rock Paper Scissors (RPS) Champion!

It turns out that the 2007 International World RPS Championships are being organized by some folks in the Web 2.0 business who attended Mesh in Toronto this week. Despite the initial OMG! factor, Rock Paper Scissors is a fast growing sport complete with its own professional organization, the World RPS society and there are regular competitive tournaments held worldwide.

For those not familiar with the game, Wikipedia has an extensive explanation. The game is said to date back to the Han Dynasty in China, spreading to Japan and later Europe. Whilst a frivolous child’s game to some, Rock Paper Scissors is a serious pursuit to others. Rock Paper Scissors tournaments have been televised, there are gambits and player strategies, and there is even an official book for sale on Amazon.

Current Rock Scissors Paper World Champion Bob Cooper hails from London and this year’s world championship is in its 7th year. Over 500 competitors are expected.

Now you’ve seen everything. Move along. 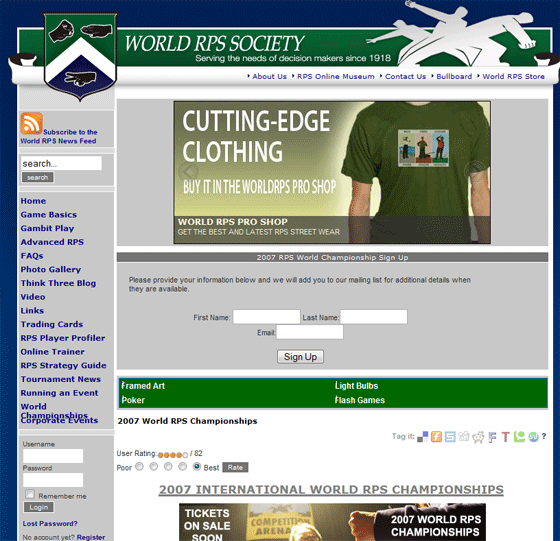