9 months in the making, we can’t possibly list all the changes, but we can focus on the big ones. 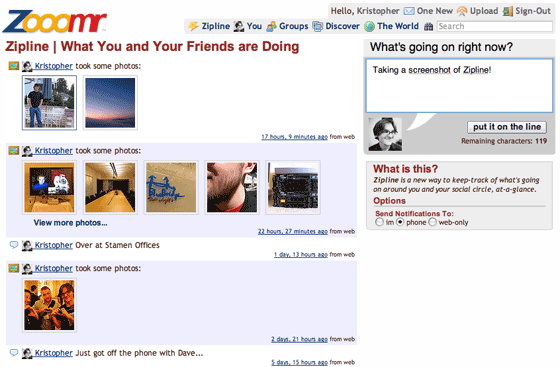 It’s surprising to see a photo sharing site looking to compete with Twitter. The combination of photos and IM don’t immediately seem like a natural combination, but then again many people never thought services like Twitter would take off either.

The new version of Zooomr will support what Zooomr calls “Infowidgets” that allows users to interact with tags in a visual way. An example is the marketplace slider in the screenshot below, instead of typing a price and saving it, users can slide their price from $1 to $1000.

Zooomr also adds its own login/ account functionality for the first time. Whilst running to date on OpenID, user feedback indicated that a significant number of people would prefer a site specific login. The new login does not come in place OpenID, both types of logins will be supported.

People Tags have been upgraded and now allow people who are not Zooomr account holders to be tagged. Tags will be tied to email addresses and are fully searchable. Non-users are emailed by Zooomr informing them of their inclusion in photo(s) on the site.

Zooomr API support will now be available to the public.

Aesthetics have also been improved with a new cleaner interface

Zooomr Marketplace will allow users to make money from the photos they shoot. Prices can be set to between $1 to $1000 and will be indexed in the marketplace for others to purchase. 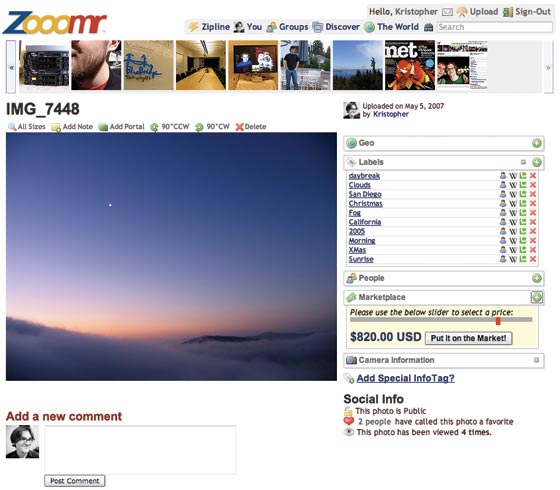 Photos will be offered for sale royalty-free and can not depict a copyrighted image, slogan or face. Revenue from sales will be split 90/10 in favor of the publisher. Zooomr Marketplace will be launched later in the year; however as at Mark III users are able to price their photos in readiness for Zooomr Marketplace’s later launch. The entire Marketplace system is being developed in-house by Zooomr and is not being outsourced or provided by a 3rd party.

The one feature still lacking in Mark III is the ability to transfer images from Flickr to Zooomr. Marshall Kirkpatrick wrote in June 2006 that Flickr may be afraid of Zooomr, and it would appear that they still are. Despite Yahoo providing export support for a range of external sites as part of the migration away from Yahoo Photos, Zooomr remains blocked from gaining access to the Flickr API to provide such as tool for its users, according to founder Kristopher Tate.
[vimeo http://www.vimeo.com/194317 w=400&h=293]