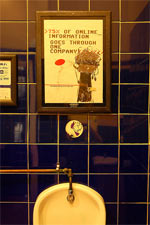 It’s Friday night in London. You’re out on the town with some friends at the local pub, drinking some beers and the call of nature beckons. Making your way to the restroom you’re confronted with advertising that tells you that 75% of online information goes through one company. On the other side of the Pond, a soccer mom makes her way along the New Jersey Turnpike, passing a sign that reads “The Algorithm is from New Jersey”. Of course whilst the first example begs the question “are they taking the piss?”, both have been exposed to the latest viral advertising campaign from the IAC owned Ask.com.

There’s no official word on how much the Crispin, Porter + Bogusky designed campaign costs, but it would be fair to presume that it’s not small change: Algorithm and “Information Revolution” advertising has been spotted on both sides of the United States and throughout the United Kingdom. But is it working?

The numbers would suggest that it isn’t. 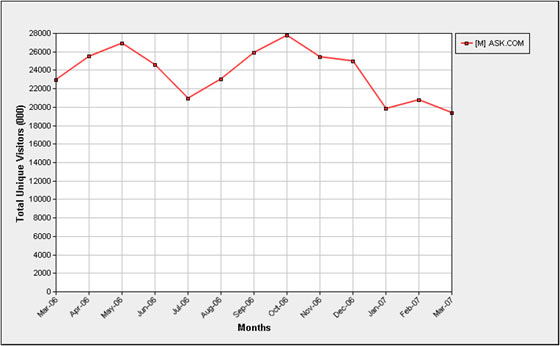 Despite the big spend, the campaign has been too clever by half. Does the average internet user even know what an algorithm is, or more importantly even care? Do pub goers in the United Kingdom care that Google controls over 75% of search in that country?

If the Algorithm constantly finds Jesus, why can’t it find increased market share?

To be a little fairer to Ask though, the comScore traffic figures only cover the period to the end of March, the campaign was rolled out in February and into early March, and things look a little brighter in April according to Alexa: 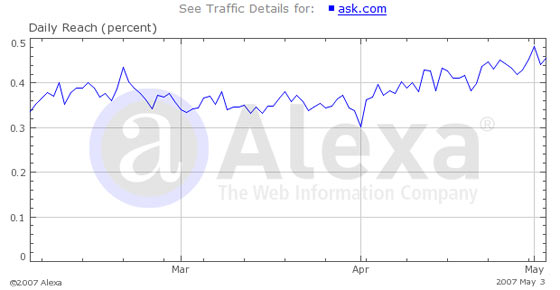 More recently Ask has announced its intention to expand the campaign to television. Greg Ott, Ask.com’s VP of Marketing writes after making the announcement that the company wants people to think of the Algorithm in the same way people think of “Intel Inside”. And yet it still doesn’t find traction for me. Perhaps I’ve been around too long and still yearn for the days of Jeeves when you visited Askjeeves.com if you had a question you needed answered, instead of Yahoo! Answers.

There’s one thing that I’ve always considered Ask to have going for it, ask.com as a URL, 3 letters, easy to remember…indeed the simplicity and marketing potential of the name was one of the reasons given when Jeeves was dropped, and yet not one advertisement drives home the name. If a tree falls down in the woods and no one is around to hear it- does it make a sound can be equally applied to Ask: if a search engine does a viral marketing campaign and no one understands it, does it make a difference?