Last.fm does for music what Dutch startup Wakoopa wants to do for your desktop applications. Like Last.fm, Wakoopa uses a downloaded tracker, except it follows how often you use applications instead of listen to music. Similarly, Wakoopa has also built a Rails-powered social website around the data, letting users share their preferences with friends, write reviews of their favorite application, and download new ones. Wakoopa is backed by a fund of the three biggest media companies in the Netherlands (Ilse, IDG, Telegraaf) and launches May 2nd.

Wakoopa’s tracker logs what applications you use and for how long, updating your personal profile every 15 minutes. On the website, the aggregate data lists the most recently used applications and most used applications of all time. Each application has a profile that lists the people and groups who use it, reviews, and tags. For free applications, it also includes a download link for various versions, potentially creating a more social SourceForge. For the private beta, Firefox is the top used application, used by 23 people logging over 117 hours. MSN messenger is an odd second place, logging a total of 14 hours.

Since raving about desktop applications doesn’t have the same mass market appeal of music, I can’t see it breaking out of the developer community unless the tracker is bundled with some really attractive freebies. 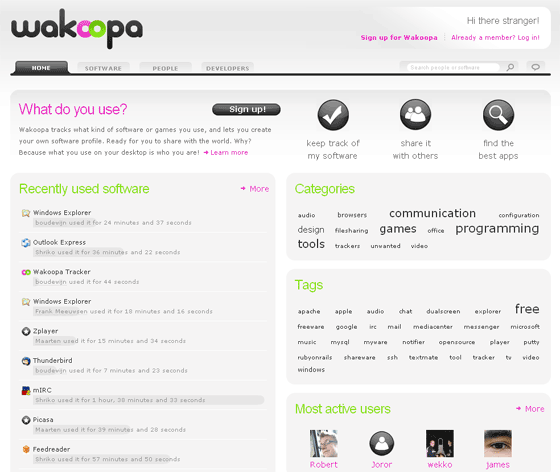