We mentioned WriteWith in a roundup post last month on new Y Combinator startups. They’ve created a group writing platform that falls somewhere between a blogging platform, a wiki, and an online Word clone. The best part of it is that it works with the existing WordPress and Typepad blogging software.

Current blogging software is rather kludgy when it comes to working with other writers on posts. To collaborate on a document in WordPress, you have to share a draft link with a friend and also create an account for that person. And even then, you only have one version of the document, causing old versions to be lost by new revisions. WriteWith may eventually change that for blogs and any other online publishing platform. 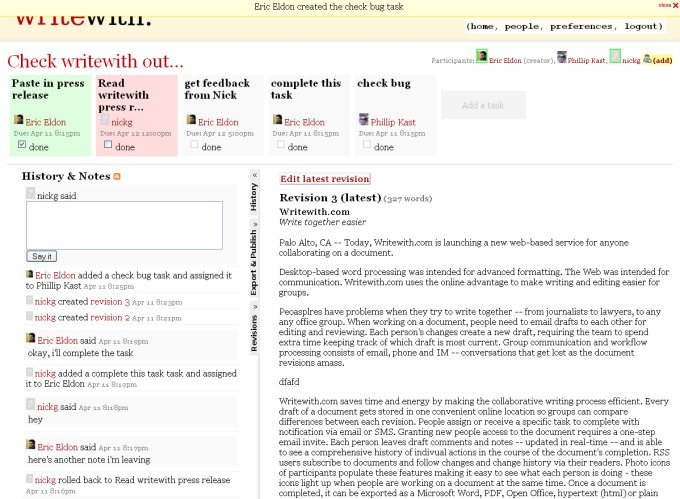 Two of the founders originally got the idea for the system when writing at their college newspapers, the Stanford Daily and Binghamton’s Pipedream. They wanted to find a better way to move articles from thought to the printed word, while handling revisions made by as many as 6 people along the way. Their first product was a newsroom, complete with administrative features for managing an articles lifecycle. That product has been used by 15 college newspapers across the US and Canada, including Stanford and the University of Alberta, which runs a national newswire. Licenses for other enterprise content management applications for newspapers, like Managing Editor, can cost upwards of $100,000.

The WriteWith team then stepped back, re-evaluated the publishing business and started designing for pixels over print. The new version is more flexible than their newsroom product and tailored specifically for managing collaboratively edited text online. And when I say text, it really is just for text. WriteWith’s text editor is taken straight out of the Dojo ajax library and doesn’t display complex WYSIWYG layout information. However, WriteWith’s focus is on editing, not the editor. 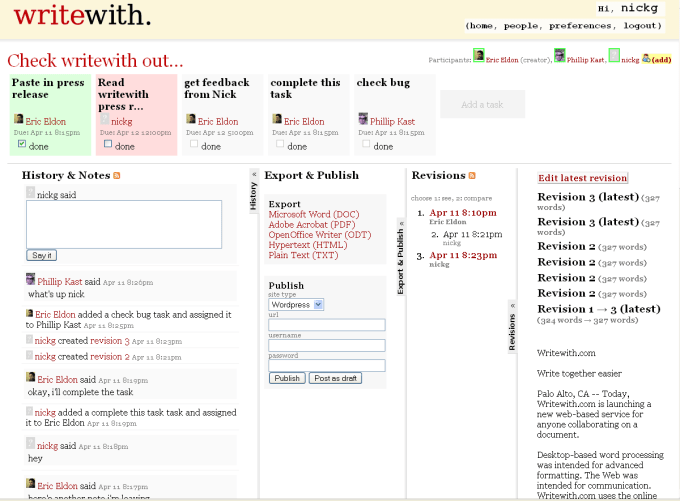 Making a document begins by starting right in the editor, or uploading a document to the site (.doc, .txt, .rtf, Open Office). Once a document is started, you can invite other people to see and edit it by email without their needing to create an account. When you go to a document page you’ll see the latest version, a list of previous versions, a message board, and task assignments. Everyone invited to edit and view a document has the equal ability to edit a document, assign tasks to each other, and post messages to the board.

WriteWith handles the potential chaos through communication and simple version control, which adds a new version of the document to the history each time a user makes an edit. The individual versions can then be compared, with the differences between each version highlighted. The live message board and tasks help to guide these revisions. Any user can assign another user a task by typing it into a task message box or post a note to the message board. When it’s agreed that the document is completed, it can then be published to a blog (WordPress, Typepad) or downloaded (.doc, .txt, .rtf, Open Office).

There’s a growing need for collaborative editing platforms as blogging becomes a more established business and the ranks of their writers grow. WriteWith may be the solution that fills that need.