Microsoft-backed ZenZui launched this morning. It’s a new mobile browser that aims to make surfing the web on your mobile device easier through widgets. The application that lets you surf over a 6×6 grid of website widgets by panning and zooming around the grid. Each of the widgets is a mobile optimized version of a website you interact with by zooming into it.

From the looks of the promotional video (see top of post) you can zoom all the way into one widget and as far out as a 4×4 grid of widgets. Zooming and panning around the grid is controlled by your touch screen (if you’re so lucky) or the number pad (for the rest of us). Although it’s currently available only on Windows Mobile devices, they aim to have Java 2ME and BREW versions later this year. 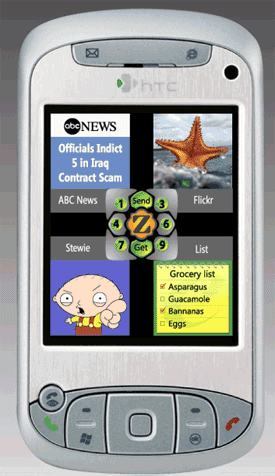 ZenZui’s zooming user interface was initially developed by Microsoft’s Redmond Research lab, and was spun off into it’s own company. In partnership with Microsoft IP Ventures, the company received $12 million in Series A funding from SeaPoint Ventures and other investors, with Microsoft retaining a stake in the company.

Each of the 36 spots currently included with ZenZui are powered by content partners, such as Zillow, Eventful, Kayak, OTOlabs, Avenue A, Razorfish and Traffic.com. They will be monetized using “well-established advertising principles like CPA and CPM (we call it CPZ – Cost Per Zoom)”. To encourage development, ZenZui will split ad revenue with widget developers. Widget developers can also choose to release an ad-free version, which will display messages from non-profits instead.

ZenZui is a step in the right direction. It removes yet more control of mobile phone “real estate” from the carriers, but it still inserts an unnecessary cost into the process, advertising. It is our belief that mobile phone platforms should move in the direction of open standards, which have benefited desktop computing platforms so much.

Blupulse is another widget platform (most likely will be ad supported). More open mobile widget platforms are Nokia’s Widset, and Opera. These platforms face the same hurdle of making the first jump onto people’s phones, but that will grow easier and easier as they more easily connect with our desktops.