Zimbra will announce a new offline client application, Zimbra Desktop, later this week. It will allow Zimbra users to access and use Zimbra’s email and other office applications, in the browser, when offline.

I spoke withZimbra Co-Founder and CEO Satish Dharmaraj about the history of the company and the new Zimbra Desktop product this morning. Listen to the podcast at TalkCrunch.

Offline access to web applications (and just as importantly, web-based data) is an area getting a lot of attention right now. Firefox has announced that Firefox 3 will allow sites to work offline by accessing local datastores. New startups like Scrybe are experimenting with this offline syncing. Adobe (and competitors) has just released it’s Apollo platform, which lets developers run HTML, javascript and Flash code outside of the browser and when offline.

Most of these products are still being developed (Firefox 3) or have just launched early or private beta versions (Apollo, Scrybe). Zimbra has written its own code to handle offline functionality, and the user experience will be identical whether users are online or offline: open Zimbra in the browser and use the application.

Zimbra Desktop will be available cross platform (Windows, Mac, Linux) and cross browser (Firefox, IE, Safari). The Zimbra web application and all user data is stored on the client computer (the database is Apache Derby). Data is synced real time when in online mode.

Zimbra Desktop does not include drag and drop functionality into the browser (for, say, dragging an attachment into an email), although the company says it will be included in a future release.

All Zimbra source code, including Zimbra Desktop, is open source – I expect other web developers to be taking a close look at how they are architecting things.

Zimbra recenty announced that they reached 6 million paying customers. The company is based in San Francisco, with a ten person office in India. They’ve raised $30.5 million over three rounds of financing, and say they will most likely not need to raise more capital. 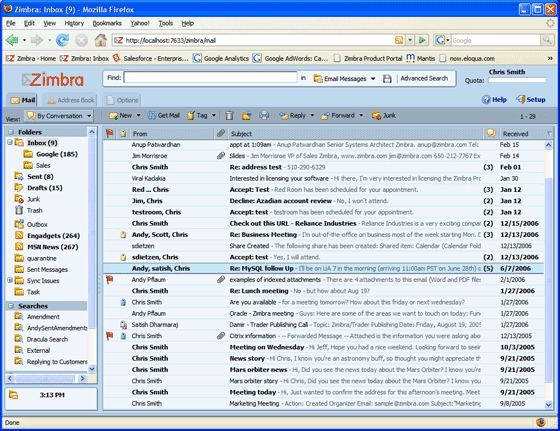