There’s a post on the Facebook blog today announcing a new group called “Facebook Sneak Preview” where they will show upcoming feature additions and changes before they are made live.

My bet is that this is their response to the user backlash and protests last year after after Facebook made some fairly dramatic changes to the site. With the new group, Facebook can ease users into the new stuff, and also get their feedback before it goes live. It’s an easy way to build consensus and dissolve criticism before it gains any steam.

The first batch of upcoming changes suggest Facebook is regrouping a bit, and redesigning things to help organize all of the new features they’ve added over the last year.

A simplified design. For those of the Facebook old guard, you’ve watched the number of features on the site grow. The new design will bring the focus back to the core elements, so the links you use the most often are easiest to find, while the others have new sensible homes. This will also help beginners understand how to get started. The Profile page will be a little sleeker, with your status rearranged, quick links under the profile picture and a mini-er Mini-Feed.

We’ve added a screenshot of how the new profile pages may look below. They are also simplifying message inboxes and networks.

Facebook’s drive to keep things neat and clean on the site is in stark contrast to MySpace’s chaos ridden widget hell. MySpace obviously does ok regardless. But I keep thinking that Facebook’s focus on order is very much in line with Google’s thinking on the matter. It may be time to start some new rumors about those two getting together, since Yahoo is obviously not going to pull the trigger on an acquisition. If Facebook does get acquired, it will be a larger deal than YouTube’s $1.65 billion. 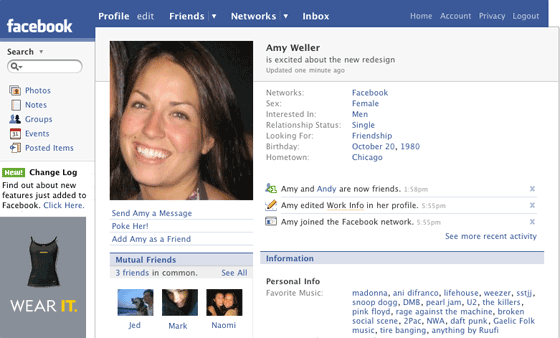