A new social network named Trusted Opinion came out of private beta over the weekend. It has the single worst logo I’ve ever seen ( a circle with a check mark and some unreadable text), and a name that suggests they are a bland reputation based service like TrustedID. But actually they’re a new recommendation-based social network that has integrated both Flash and Ajax components very nicely.

Your network of friends is viewed through a rotating, solar-system like visual module built in Flash. Direct friends are closest, then their friends, etc. For now, the only activities supported on the site are movie reviews (via an Ajax tool). If a friend or friend of a friend really likes a move, you’ll see it as a recommendation. Recommendations from people further out in your network have less of an effect. 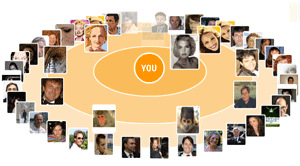 Trusted Company will branch out into other recommendations soon. In part of the demo (linked from the home page), they show slots for books, jokes and restaurants, in addition to movies. The goal, the company tells me, is to turn Trusted Opinion into a universal rating platform for all manner of goods and services.

The service overlaps with a number of other social networks and other startups. The recommendation/review sites like Yelp, for example. Fast growing Flixster is also a competitor, although Trusted Opinion is going to more effort to push movies that are recommended by friends.

I won’t judge Trusted Opinion just because of the horrific logo and a corporate name that includes words that can actually be found in the dictionary (with all of their vowels intact), but it’s clearly going to put off the hipster 2.0 crowd that’s looking for ever more extravagant design and creative, made up names.

Trusted Opinion can’t really be said to be headquartered anywhere. The company has one employee in Silicon Valley (famous “mommy blogger” Melinda Roberts). The founders live in Israel and Germany, and the development was done in St. Petersburg, Russia. They’re mostly self-funded to date.