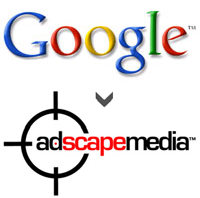 After some rumors of a deal earlier this month, Google has expanded it’s advertising reach by moving into video game advertising with their $23 million acquisition of Adscape. Adscape is a video game advertising company whose AdverPlay product lets developers place dynamic ads right inside the game and Real Virtual Gateway product enables two-way text, audio and video communication via SMS Text or eMail.

Last May Microsoft had acquired a similar in-game advertiser Massive to run advertising across its Xbox Live and MSN gaming platform. The WSJ (subscription) placed the deal in the $200 to $400 million range. Massive claims they “can provide publishers and developers $1–$2 profit per unit shipped for their titles.” AdverPlay and RVG are the product of 5 years of development and consist of 1 issued and 30 pending patents.

This is an interesting development considering Google’s acquisition of Sketchup and suspected virtual world in the works.