After dabbling in movie download tests, Walmart is now jumping into the movie and television download business head first, and will launch their new site later today at walmart.com/videodownloads.

This is an extremely crowded market already, although Walmart has locked up deals with all of the major studios – Walt Disney, Warner Brothers, Paramount, Sony, 20th Century Fox and Universal. See the chart included in this post for the studio deals locked up by other movie download services – CinemaNow, MovieLink and Amazon Unbox all have similar deals as well. iTunes and other competitors don’t.

Prices for movies will be $10-$20. Television shows will be $2. Downloading and watching content will require a Windows PC, as with all of the services mentioned above except iTunes. 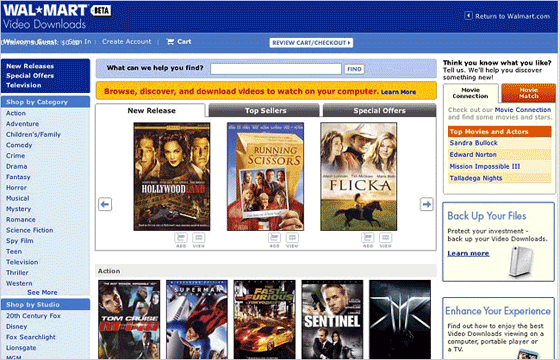 Will This Be Successful?

Walmart has had mixed results in their online initiatives. They’ve completely bailed out of the movie-rental-by-mail market when they couldn’t make headway against Netflix. In this case, however, there is no established player to try to kill. The movie download market is in its nascent stage and anyone can win.

CinemaNow and MovieLink should be particularly worried. They operate on very low margins, are being attacked by iTunes and others already, and now have to contend with Walmart. It’s unlikely they’ll have the staying power to make it, and it doesn’t look like any of the major sites are looking to buy in this space. It’s cheaper to build a Windows-based DRM-laden player and do deals with studios directly.

However, iTunes still has the only service that works cross-platform, plays on an iPod and now on the living room television with Apple TV. And they already dominate the television download market. Walmart will not be able to easily hurt iTunes in the short term.

And don’t forget that Netflix has already released a very, very good free(ish) movie and television download service, and Joost is another service coming soon. None of these companies are going to lie down in the face of competition from Walmart, and they know that Walmart will bail out of markets that they can’t dominate.

All of this is good for the consumer, but prices are still too high. Movie downloads are still more expensive than simply buying a DVD.