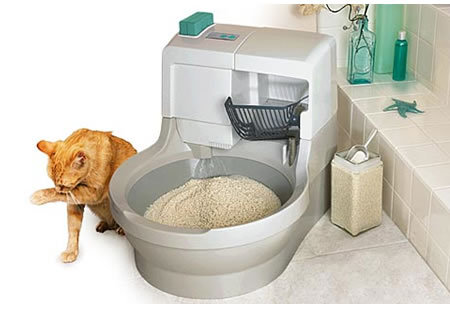 I have cats. Two of ‘um. I once got one of those LitterMaid things, but after a few days, I realized it was a lot more complicated than just changing the litter box manually. Sure it’s a gross chore, but it’s nothing difficult.

So I’m sure you can anticipate my reaction for this new cat poop accessory. That’s right, in the spirit of LitterMaid comes the Cat Genie Automatic Litter Box. And it takes it so much further than the LitterMaid.

Rather than simply scooping the poop and placing it neatly into a little poop container for you to dispose of (read: throw over the fence into your neighbor’s yard), it actually connects to your home plumbing to send turds sailing toward the sea. It also sprays some sort sanitation juice to make it all less yick.

Now, I’m not going to consider all of the possible problems here. Just let me point out two. First, look at the size of the of the box. Cats are weird with litter boxes. They might get in it, but if it’s small, they’ll gladly just crap over the side (then they’ll scrape the floor to cover it with nothing). Secondly, who the hell has a phantom pipe sticking somewhere convenient just for a litter box? Oh and it costs $350. GG.