It was only a matter of time before someone put up a simple web interface to the 20 million search queries published by AOL last week (see AOL Proudly Releases Massive Amounts of Private Data, and AOL: “This was a screw up”).

Here’s something you guys might like. I whipped this up to help those of you who don’t feel like grepping your way through 2 gigs of files. it’s a searchable mySQL database of these searches (most of them, anyway, I’m not done indexing yet) with all redundancies removed, searchable by categories. Hopefully this should make for a few hours of fun.

They even picked out a suitable domain name and took the time to wrap it in Google ads. See AOLSearchDatabase.com to search the data via user ID, search terms, date of search or website results. A screen shot of the results is below.

I also spoke on the phone today with Andrew Weinstein, the AOL spokesperson who released the apology. He is genuinely pissed off that this happened, and said he was as surprised as everyone else when he found out about the debacle late Sunday evening. As an interesting side note, he said he first heard the news on TechMeme, one of my favorite sites, and contacted the AOL employee who posted the data and the exec team immediately to deal with the problem. After the call the first thought that came to mind was, why don’t they find someone like Andrew to run AOL customer service? 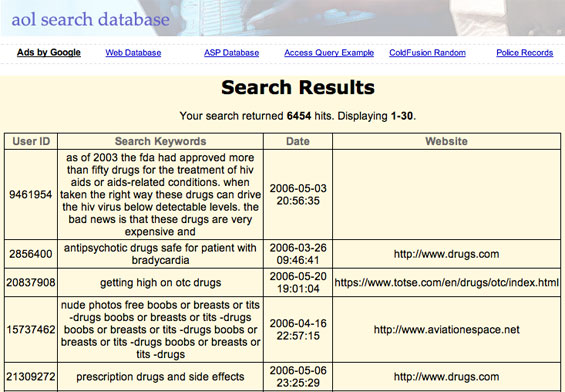