Yahoo Messenger Version 8 for Windows, which can be downloaded here, launched out of beta today. Our previous writeup of the beta launch is here.

The key new feature of Messenger 8 is that it is open to third party developers to create widgets that work within the client. Yahoo is reporting that 180 plugins have been created in the last month since the platform was opened.

The five most popular plugins are:

Yahoo Messenger is the second largest IM network after MSN, and even though Yahoo and MSN have announced interoperability (and continue to expand the beta group testing it), there’s still clearly a level of competitiveness between the two teams. Yahoo sent me the chart below comparing the two services. 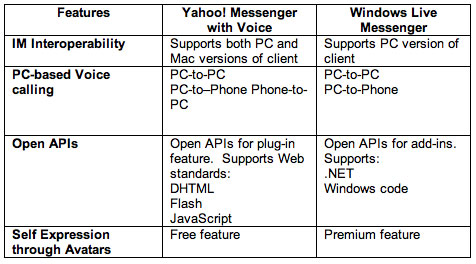