Seattle based Blue Dot launched its social bookmarking and networking service last week at Gnomedex. Several review sites online have focused on how crowded the social bookmarking space is. I was working on a post myself that was super harsh…until I was able to reach the company on the phone. I was wrong. Blue Dot is not just one more social bookmarking site. It has a number of important and unusual features.

The company is made up of a 10 person team with a flat structure; no one is anyone else’s boss and the company credits this structure with much of its ability to innovate. Several of the team members came from Microsoft and Amazon. Founded in 2004, Blue Dot has 5 investors who have put in a total of $1.5 million in angel funds. Those investors include former Starbucks Senior VP Don Valencia and former Microsoft Senior VP Richard Fade.

The basic premise of the system is that users can tag items into their online archives and befriend other users to share access to part or all of their items saved. The real differentiation, however, is found in the feature set.

Access Other social bookmarking services let you mark items as either public or private. Blue Dot allows you to create groups and only share certain items with members of those groups. Group members can subscribe to those feeds in any feed reader that supports authentication. Authenticated RSS feeds aren’t an advertised feature, this first version of Blue Dot is aimed primarily at nontechnical users, but it’s very nice. The ability to set different access settings to different groups is substantially more sophisticated than most consumer facing online social bookmarking services.

Images Images from the pages you bookmark are autopopulated in Blue Dot. Part of your pop up box for tagging is a field to click through images from the page until you find one you want to select for inclusion in your archive. I’ve seen a few other systems do this, but not many. It is smooth and makes for a great user experience compared to the text-dense look of most social bookmarking services. 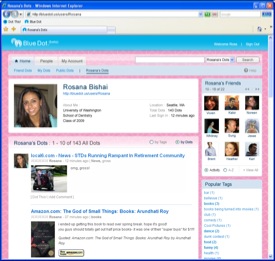 Comments Blue Dot lets friends leave comments in response to items you’ve bookmarked. That’s not completely unique, but it’s a good feature that’s far from universal. The fact that comments are limited to your friends will cut down on unhelpful feedback, they say. Could go either way, I think.

Widget Offering a widget to syndicate the feed of your recent bookmarks is becoming a best practice for social bookmarking services – but most are in javascript and are ugly. Blue Dot has a relatively attractive widget and offers a version in Flash. That means it can be used in MySpace. That’s a big deal. The company says they’ll be building this up even more in the short term future.

Search Social bookmarking + social networking works especially well when it comes to search. Blue Dot’s search feature lets you choose whether you want to search inside your archive, your friends’ or all users’. If you search inside your friends’ archives and find less than 10 results then the system will round out the top ten results with items from all users. I’ve always enjoyed the feature at LookSmart’s Furl.net that searches inside my bookmarks, the bookmarks of all users and from the web at large. Blue Dot takes a similar concept to the next level.

There are still some problems I have with Blue Dot. The company tells me that the ability to communicate directly by email or IM with my friends in Blue Dot will be added soon. I hope so, because the system is frustrating to use socially without it.

A del.icio.us importer will be available soon, Blue Dot says. Export is something they are thinking about how to implement. Open Identity standards? No comment yet, the topic has only been the subject of casual discussion in the company so far.

Another thing that bothers me about Blue Dot is that they put a trademark on the phrase Social Discovery! The company says they did that because they don’t want to be branded as a social bookmarking service and they hope to be a pioneer in this new space. I don’t buy it; I think that’s just obnoxious and they should drop it.