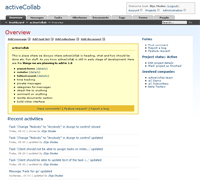 Ilija Studen, a developer from Serbia, has released a free clone of the popular project management service Basecamp. Studen’s product is called ActiveCollab and has been down since blowing up on Digg. Though the site is available only intermittently now, that’s not of a lot of consequence because of its service model. ActiveCollab is a PHP/MySQL tool that users download and then install on their own web servers. The end result is a free, open source and web based application.

Studen says he first got the idea of open sourcing his project from a discussion in April on Paul Scrivens’ blog titled “Being 37Signals for Free.” Studen claimed he had created such a product in that conversation and has now returned to update the thread with news of ActiveCollab’s launch.

The creators of Basecamp, 37Signals, have enjoyed a virtual monopoly in the world of high quality, low-cost online project management software. Though the company is widely loved, Studen’s clone could pose a threat to their subscription based business model if it turns out to be of high quality. The company offers a variety of popular online tools, but this is particularly interesting because of the company’s role as one of the key though-leaders in the development of Web 2.0 business models.