In a press conference today Microsoft CEO Steve Ballmer and chairman Bill Gates announced that in two years Bill Gates will stop working for Microsoft full time. He will shift to part time work there and will be working full time at the Gates Foundation instead. A two year transition plan is being announced today.

Ray Ozzie will take over Gates’ role as chief software architect effective immediately. Ozzie has been the most prominent advocate of web based software at Microsoft. He has been a Chief Technology Officer at Microsoft since his company Groove Networks was acquired in March, 2005.

The webcast of today’s press conference is available via the following links: 56 Kbps; 100 Kbps; 300 Kbps 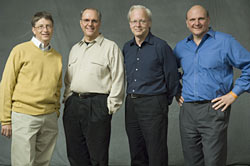