This system has got all the bells and whistles you’d expect from a social networking service, VOIP excluded perhaps. Photo upload, private chat, blogs, commenting and more. There’s also an events board that looks like its getting good use. I’ve already tested out all the features with photos of myself under a pseudonym and I’ve met a lot of really great people. Just kidding.

The real pull is likely to be the fact that explicit photos aren’t pulled – they’re encouraged. The system’s familiarity and censorship free policy could really appeal to a portion of MySpace’s now 75 million users.

How will teens be kept safe from SmutVibes? Laughably perhaps, registration is not allowed for those who provide a birth date indicating that they are less than 18 years old. Hmmm…don’t think that’s going to be enough.

Membership is free and I can imagine ad revenue is a real possibility. See also the company’s partner site, Christianvibes.com. 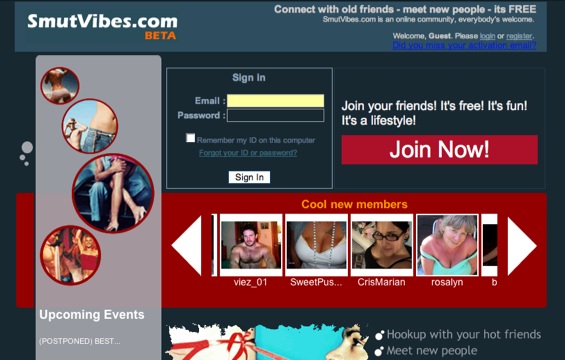