We wrote about Google Reader over the weekend and gave what I felt was a factually correct review of the product. However, some of the comments I’ve received to the post, along with a couple of emails, suggested some of my criticisms were off the mark. I took another look today and I must say that I was dead wrong on a few points.

I’ve copied my “areas to improve on” below and have bolded text that was incorrect:

As I mentioned above, Google Reader is targeting heavy RSS readers. The product isnâ€™t useful, however, for moving through a large number of feeds efficiently.

Posts are listed in order of â€œrelevanceâ€ (which doesnâ€™t seem to actually sort things in any relevant way), or by date. I need posts to be grouped under the individual blog because I read some feeds first – Google Reader doesnâ€™t allow me to do this and I am frustrated trying to find the authors I like to read the most. There is no search functionality within feeds already subscribed to, so there is no way to find this content.

The reader is slow. Paging down through posts results in a long and unacceptable delay. As a side note, importing my OPML list took about 10 minutes. Since this was a one-time cost, itâ€™s not that big of a deal.

Since this is a web-based reader only, there is no syncronization.

Google uses ajax instead of frames. While frames is an old technology, readers using it allow for multiple scroll bars – this means you can keep the feed frames locked while scrolling through individual posts. This needs to be addressed.

There is no unsubscribe button for feeds.

Google Reader is optimized for Firefox. It isnâ€™t working properly on other browsers yet.

The three innacuracies were:

A quick look at the “My Subscriptions” link that is prominently displayed at the top of the reader shows that all of this functionality is included, and actually works quite well.

Under this tab, feeds are shown, can be sorted (second circle below), can be deleted, and, perhaps most importantly, can be searched (third circle) using the “filter” feature. Clicking on any particular feed brings up the related posts in the bottom window. It’s actually a very nice intuitive UI. 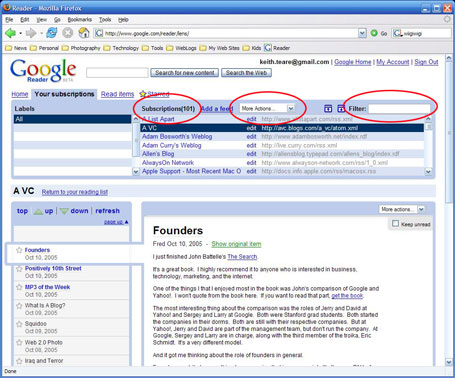 Google Reader is still painfully slow, but these features, which I previously missed, do much to make it a competitive product. In my opinion, the “my subscriptions” tab should optionally be the home page, reducing the necessary clicks to get there.